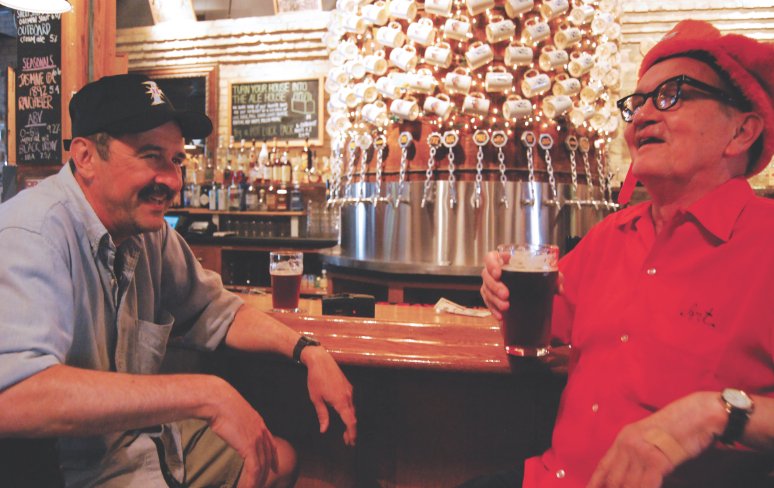 I’m Art Kumbalek and manischewitz man oh man what a world, right? Look, it’s that time of year again that I hear every time I turn around and turn on the radio or the TV for heaven’s sake. So I’m full of the so-called vacation stress and decided to take a week off, which means there won’t be any drunk essays to read, boo-hoo.

Instead, I was called to come up by the Uptowner boutique tavern / school on Center Street near the Humboldt to enjoy a nice cocktail or three and cool my heels until my guys shine for us. may we offer a high- excuse to shy away from Christmas family obligations. Hey, come if you want, but you buy the first round. Let’s go.

Lem: Hi, Artie. Artie Kumbalek. What is your pleasure, dere?

Art: Lem? Lem fucks Lemke. Behind the bar, what the fuck. I thought you were still in Hayward this time of year.

Lem: That’s right, Artie. So I should be, but I go down to the Uptowner and earn a few, three dollars with the bartender here for the holidays; because between you and me, the taxidermy business, it’s a bit slow this time of year – mostly pets. Not a lot of money to stuff the pet, Artie.

Lem: Damn it, Artie. And the customer who brings me the pet is still sad. I can’t bring myself to make them pay anything for the work. Especially when the deceased died dere — accidentally.

Stay up to date with the latest news
Subscribe to our free daily email newsletter to get the latest local news, dining, music, arts, entertainment and events in Milwaukee straight to your inbox every day of the week, plus a bonus email review of the week on Saturday.

Lem: These are the most difficult tasks for the taxidermist. For example dere, Artie: Do you know what I get when someone’s parakeet meets a lawn mower?

Art: I couldn’t tell you, Lem.

Lem: Shredded Tweeter. He’s a good dere, isn’t he an Artie? A bit of taxidermy humor. See, your blades are spinning on the mower, so when little Petey flies in …

Art: How about some Manhattan bourbon candy, Lem. Strong on bourbon, one cube, no garnish, and save the vermouth after the fact, say until tomorrow.

Art: What a world, isn’t that a Lem? Peace on Earth, benevolence towards men. Yeah, Good fucking luck.

Lem: Now you’re not some kind of dere Scrooge, are you Artie?

Art: Fuck no, Lem. It’s just that a guy like me can feel a little bit out of the way, especially when it comes to Santa Claus. Hey, I love Santa just as much as the Next Button, but he’s always busy doing stuff with the kids – he doesn’t have time for me.

Lem: Is that the truth, Artie?

Art: I’m not jerking you off for that, Lem. The Fat Man calendar is busy but good at this time of year. It’s breakfast with Santa, brunch with Santa, story time with Santa, makeup with Santa, barnyard animals with Santa. For heaven’s sake, I wish that one of those years he made some time aside for guys like me and made himself available for a couple, three adult activities for a change.

Art: Like poker with Santa Claus, Packer Game with Santa Claus, Shots and Beers with Santa Claus, Boys night at the Gentlemen’s Club with Santa Claus. I’m sure the merry pot of lard would enjoy any of these activities far more than having a bowl of oatmeal at dawn with a crowd of kids who still have a hard time negotiating the nuances between a pair of training pants and a layer of focking.

Art: You bet, Lem. Hey, how about another one of those Manhattan bourbon, hold the Manhattan.

Lem: My pleasure, Artie. On me. Here. Busy time of year, is this vacation Artie?

Art: For some, I imagine. But not for yours truly, no sir. I know how to avoid all the fuss.

Art: Oh yeah, Lem. While everyone’s running around like a headless chicken in December, I’m just sitting with my toes in the air enjoying a nice hot toddy and watching the Bucks game. You see, I don’t celebrate Christmas until much later in January because it’s just too practical and economical not to. Take your Christmas tree, for example. These babies can give you a lot of money, especially nowadays, can’t they.

Lem: I should say.

Art: Not me, Lem. I haven’t spent a single penny on a tree since 1972. By the second week of January I got all the free trees I can carry, sitting on the curb, ready to be picked up. And you can usually find at least one that still has garlands on it, I’m not kidding. Anyway, and you, Lem. Are you busy with the holidays?

Lem: Cripes dere, Artie. I haven’t even had a chance to start making my traditional fruit cakes.

Art: The fruit cake. I’ll tell you, Lem, here’s what I know, maybe I already told you. If the Cro-Magnon man or the Piltdown man, I forget which one, hundreds and hundreds of years ago – maybe some three thousand, damn if I know – had the technology and the knowledge – not to mention the crazy stomach – for baked a fruit cake, I would bet you a dollar two eighty that the archaeologist would find, next to their fossilized tools, and fossilized bones and so on – a cake with Cro-Magnon fruits. Perfectly preserved and just as edible as if it had been concocted yesterday, which doesn’t mean much to me. They do, however, make a decorative door stop.

Lem: Hi, Artie. I have a zinger for you that you might want to put in this little column that you write down somewhere. Here it is: what is the difference between snowmen and snow maidens?

Lem: Snowballs. How about that, Artie. Let me get you another one. On vacation.

(Hey, I know you have to go, but thanks for letting us lend an ear because I’m Art Kumbalek and I told you.)

Weird and new twists and turns as pandemic reading explodes

Sight Magazine – Essay: Buddy Stouffer’s execution was the last in the US for 2021. Will it be the last to be proven wrong?