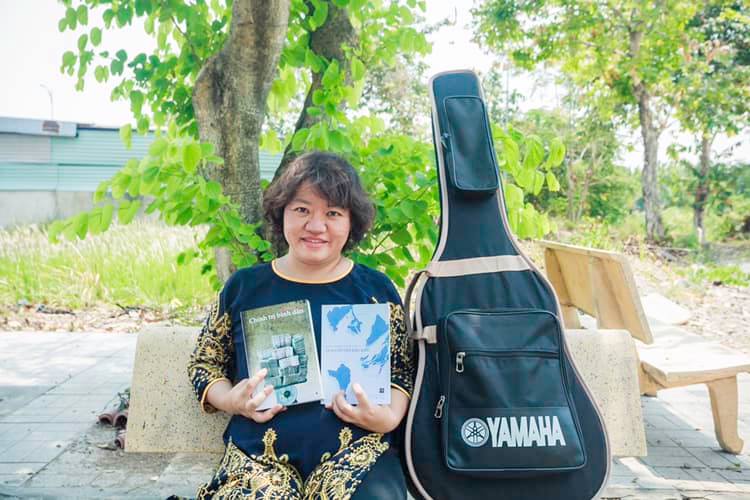 (New York) – Vietnamese authorities should drop all criminal charges against prominent human rights activist and blogger Pham Doan Trang and release her immediately, Human Rights Watch said today. On November 4, 2021, a Hanoi court is due to bring her to justice for “propaganda against the state of the Socialist Republic of Vietnam” under article 88 of the 1999 Criminal Code. She could face up to 12 years of imprisonment. jail.

“Prolific writer Pham Doan Trang faces harsh retaliation from the government for his decade of advocating for free speech, press freedom and human rights,” said Phil Robertson, director deputy for Asia at Human Rights Watch. “By pursuing her, the Vietnamese authorities show how afraid they are of popular and critical voices. “

Police arrested Pham Doan Trang, 43, on October 6, 2020 in Ho Chi Minh City, just hours after the annual US-Vietnam human rights dialogue, and transported her to Hanoi. After indicting her, they detained her for over a year in pre-trial detention without having access to a lawyer. The case against her and her ill-treatment violate the International Covenant on Civil and Political Rights, which Vietnam ratified in 1982.

Pham Doan Trang has long been involved in peaceful protests against government policies. She participated in protests outside police stations and at airports when other activists were arrested, participated in anti-China protests, and helped lead environmental marches. She has shown solidarity with her fellow activists by trying to attend government show trials and, risking her life, has periodically visited the families of jailed dissidents to provide support and assistance.

Government security forces frequently persecuted, harassed, and physically assaulted her. In 2009, the police detained her for nine days on “national security” grounds. Security officials subsequently detained and interrogated her several times and placed her under house arrest to prevent her from joining protests or meeting with foreign diplomats.

She walks with a severe lameness from an injury when security forces forcibly dispersed an environmental protest in Hanoi in April 2015. In September 2015, she went to the Hai Ba Trung District Police Headquarters. in Hanoi to protest against the arbitrary detention of another activist. , Le Thu Ha, and others. There, security officers beat protesters, bleeding his mouth.

In May 2016, police arrested her and prevented her from attending a meeting with U.S. President Barrack Obama, who invited her to join an activist rally during her visit to Hanoi. In November 2017, she was arrested after meeting with a delegation from the European Union preparing for the annual bilateral human rights dialogue between the EU and Vietnam. Police detained her again in February and June 2018 and questioned her about her writings and activities. In August 2018, security officers interrupted a concert she was attending in Ho Chi Minh City, dragged her outside, took her to a police station, interrogated her, and beat her. They later left her at the side of a road where six men in civilian clothes beat her.

In January 2020, Pham Doan Trang and other activists released the first edition of the Dong Tam report, which highlights the violent land clash in Dong Tam Township. In June 2020, authorities arrested three contributors to the report, Can Thi Theu and his sons Trinh Ba Phuong and Trinh Ba Tu. The police charged them with anti-state propaganda under article 117 of the Criminal Code. In May 2021, a court in Hoa Binh province tried Can Thi Theu and Trinh Ba Tu, found them guilty, and sentenced them each to eight years in prison, followed by three more years of probation after serving their terms of jail. Trinh Ba Phuong has been in custody since June 2020. A Hanoi court is due to hear his case with land rights activist Nguyen Thi Tam on November 3, 2021. Nguyen Thi Tam was arrested in June 2020 on the same charge. Pham Doan Trang released the third edition of the Dong Tam Report on September 25, 2021.

In the indictment, the Hanoi People’s Procuratorate alleges that Pham Doan Trang’s writings between November 2017 and December 2018 violate article 88 of the 1999 Criminal Code. She is accused of having illegally stored documents in English : 1) “Brief Report on the Marine Life Disaster in Vietnam”; 2) “General assessments of the human rights situation in Vietnam”; 3) “Assessment Report of the Beliefs and Religion Act 2016 in relation to the exercise of the right to freedom of religion and belief in Vietnam”; and 4) the Vietnamese version of the 2016 Beliefs and Religion Law report. According to the indictment, “the content of these documents is to propagate psychological warfare, to disseminate false information which sows confusion among the population; to spread information which distorts the directives and policies of the state of the Socialist Republic of Vietnam, defames the popular administration. Authorities also indicted Pham Doan Trang for participating in a roundtable discussion on BBC Vietnamese and giving an interview to RFA Vietnamese.

“Writing about environmental disasters, human rights violations, lack of religious freedom and talking to the international media are not crimes, but the authorities have decided they are,” said Robertson. “The government should welcome Pham Doan Trang’s investigations into wrongdoing, abuse and malfeasance, rather than punishing her. “

Pham Doan Trang was the editor of “Tuan Vietnam”, an online weekly part of VietnamNet, one of the country’s most popular news sites. She has published articles in print and online media. She co-wrote “Autobiography of a gay man(Bong, Tu truyen cua mot nguoi dong tinh), a bestseller published in 2008 on discrimination against homosexuals in Vietnam and their demands for equal rights.

She helped Vietnam and the East Sea conflict (Vietnam & Tranh chap Bien Dong), published in 2012. She is the collaborator of two other books published in the form of samizdat: Anh Ba Sam, a book on the work and imprisonment of prominent blogger Nguyen Huu Vinh; and From Facebook to the street (Tu Facebook xuong duong), which documents rights activism and protests in Vietnam from 2011 to 2016.

She is an outspoken blogger on topics such as lesbian, gay, bisexual and transgender rights, women’s rights, environmental issues, the land conflict between Vietnam and China, police brutality, repression of activists and aspects of law and human rights. It promotes electoral reform and human rights education. His articles and blogs often focus on the role of the media in social and political life.

With the help of other bloggers, she wrote and posted on her blog a brief history of the Vietnamese “blogosphere”. She has written, in real time, about the arbitrary and illegal arrests of activists, protesters and bloggers, and the forced shutdown of an online newspaper. She frequently urges people to use social media in a responsible manner that promotes a non-violent and flourishing civil society movement.

Pham Doan Trang has also always advocated for an impartial and rights-respecting justice system. She was editor-in-chief of Law magazine online, which has published numerous articles and translations on lawyers and human rights, the fight against forced confessions, the state’s use of corporal punishment, violence domestic, legal reforms in China, high profile death sentence cases. in Vietnam, protections against self-incrimination and many other topics.

Pham Doan Trang has also written on international issues such as the democracy movement in Hong Kong, for which she provided a timeline of events and key issues for Vietnamese readers who cannot read other languages, and the human rights crisis in Crimea. In both cases, she also translated English articles on these topics into Vietnamese, which others disseminated in Vietnam.

Pham Doan Trang’s work also seeks to draw international attention to Vietnam’s appalling human rights record. His blog includes English translations of his writing in Vietnamese, including calls for the release of political prisoners. Other entries include “Report on Removal of Bloggers Celebrating International Human Resources Day in Vietnam,” “Pushback when Vietnam hands Uyghur immigrants back to China? “,” The Laws of State Impunity “,” Media Censorship in Vietnam “and” Chronology of Blogging Movement in Vietnam. ” She is also the co-editor of the English website Vietnam Right Now, which aims to disseminate “objective, accurate and timely information on the current social and political conditions in Vietnam today”.

In February 2019, Pham Doan Trang co-founded the Liberal Publishing House, which publishes a range of non-fiction books written by Vietnamese authors on topics such as political science, public policy and other social issues, such as Politics of a police state, nonviolent resistance, Politics for the people, Life behind iron bars, and A handbook for families of prisoners. The government considers these books to be sensitive and has effectively banned their publication. She left the publishing house in July 2020. In May 2021, police announced that they had arrested someone for allegedly distributing books published by the liberal publishing house.

“The Vietnamese government has no responsibility for its decades of cracking down on critics like Pham Doan Trang,” Robertson said. “The country’s donors and trading partners such as the US, EU, Australia and Japan must stop sweeping Vietnam’s systemic violations under the rug.

Why do the leaders have the advantage over the fences at the new Cheltenham course?