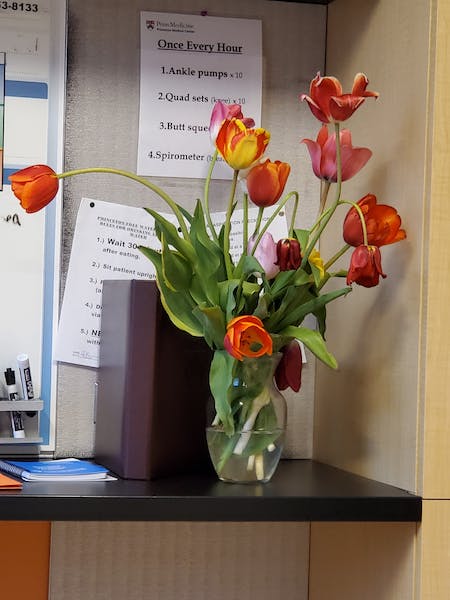 Uncertainty of the Stomach – The Princetonian

If there’s one place you don’t want to be famous, it’s the hospital. Unfortunately, that was the position I was in last April when an ulcer ruptured my stomach. Over the past year, I’ve been called an “enigma”, a “mystery” and a “surprising case”. No one had ever heard of a 27-year-old woman’s spontaneous stomach explosion (with few prior symptoms).

I was a favorite during the rounds. “Why did this happen?” I have asked countless times. The modal response, “We don’t know. Sometimes these things just happen. As a graduate student in population studies spending my days trying to figure out why, I was unimpressed.

Upon my release, everything I believed about myself was challenged. Two weeks prior I had raced the Essex Cherry Blossom 10K. I thought I was healthy and strong – now I could barely open the doors to Forbes or pull myself up in my raised bed. I thought I was a happy person – now I was crying in the aisles of Wegmans and in the restrooms of bars in Atlantic City during my “vax-cation” – a day trip to get vaccinated. I thought I was a hard worker and enjoyed my job – for weeks I couldn’t read a newspaper article, or listen to a friend’s defense, or write a paragraph, or even use ggplot without be completely exhausted.

One question dominated my thoughts: “When will I be myself again?”

My recovery was presented to me as such: my ability to return to my normal self was a function of time (6 weeks, at most 6 months) and a binary variable – whether or not I followed instructions. Linearity is rooted in the world around us: if we do X, Y will happen. If I study hard in high school, I can go to Princeton. If I work hard at Princeton, I can get a good job. I can have a good life. If I work enough hours on my research, I will be published in a top journal and on my way to tenure. If the population is highly vaccinated, we can stop wearing masks. We can go back to the way things were. The “Five Stages of Grieving” involves a staged function.

I spent an above average amount of time thinking and believing in linearity, control, normality – these are all fundamental concepts of social science. The linearity assumption, so entrenched in statistics, is often overlooked. But here’s the thing, linearity is often a poor assumption. We know that, but it’s often the best we can do.

Causality is notoriously difficult to establish, even in medicine. The world is wracked with uncertainty, deviations from forecasts and events that experts don’t see coming. Average experiences are not universal. Random bad things happen all the time. You can be young, double-vaccinated and boosted and still be hospitalized with COVID-19. You can follow environmental best practices and see your home or town destroyed in a natural disaster. The normal curve exists in the aggregate – the median age of a perforated ulcer is 72 years – but there are always individuals at the tails. Being an outlier isn’t as fun as Malcom Gladwell led me to believe.

It is one thing to understand academic concepts intellectually, it is another to live them. Over the past two years, we have all lived in a world wracked with nonlinearity, uncertainty, grief, and trauma. It’s overwhelming. I imagine many of us wondered when we would return to “normal”. I dealt with the chaos of 2020 by separating the macro (what was happening in the world) from the micro (what was happening in my life). I was reassured by my luck in being able to control my immediate surroundings. It is a privilege. For many, the macro and the micro are inseparable. And this strategy is tenuous.

Follow-up after follow-up visits, new prescriptions, procedures, supplements, and diets brought little improvement. Most of the time I felt some kind of pain ranging from mild discomfort to pain so intense I was bedridden. I was unable to predict what tomorrow would bring. After the prescribed 6 months, it was clear that despite doing everything “right”, my recovery was not following functional form. So I changed my expectations – to be more patient, to accept that there are limits to what I can control, and to focus on the present. These strategies are essential for the recovery of other conditions – prayer of serenity is a staple of Alcoholics Anonymous.

My embrace of nonlinearity and the unknown has been, well, nonlinear. At first, I found embracing uncertainty to be deeply unsettling and frustrating. This went against my belief that we should not accept the status quo. We must strive to improve systems and reduce the risk of poor results. I wanted to do, plan, solve. But, improvement and progress are not binary variables between perfection and abdication – they are continuous with many fluctuations.

Over time, I’ve found accepting a degree of chance to be liberating. I thought back to my freshman statistics class. We discussed that linearity being imperfect is a good thing. Otherwise, life would be predetermined and unsurprising. Getting back to normal might not even be a good goal. This implies stagnation.

The calendar is another important academic and now personal concept. When we start and follow through with communities, countries and ourselves, we can profoundly shape our discoveries and the stories we tell. Take for example, the Skip to Opportunity experiment and Gautreaux Program on neighborhood effects and child outcomes. These programs moved people from disadvantaged neighborhoods to more affluent neighborhoods. Short-term ratings were poor. Longer term results are more promising.

Get the best of ‘the prince’ delivered straight to your inbox. Subscribe now »

We live in a world where death and destruction dominate the news. But, zooming out, humans around the world have been live longer and healthier than ever. In an attempt to control what I can, I started weightlifting last summer. I wanted linear progression. There are weeks when I don’t progress or even regress. But I’m obviously stronger than August. Life is long. The story is longer.

In a favorite Star Trek episode, “A Measure of a Man,” Captain Picard tells Data, “It is possible to make no mistakes and still lose. It’s not a weakness. That’s life.”

Sometimes there is no satisfactory answer to the question “Why?” Setbacks happen. Code and experiments break, tests fail, new variants emerge, war and conflict erupt. Things go wrong. They remain in error longer than we wish. But, things are going well too. We learn new things, discover new hobbies, improve technology and develop vaccines. The paradoxical feelings of release and apprehension to embrace uncertainty are captured in Avenue Q’s closing number “For Now”. The disillusioned Princeton, sings “And we will accept the things that we cannot avoid, for now…”

Today, I can’t avoid the 13 pill bottles that litter my dining room table. But, last April, I presented at the conference that I missed last year. My tears slowed down even though they didn’t stop. I won’t know what caused my perforated ulcer. It’s okay. I can remain an enigma. I did my best with what I could. For now, I can just be.

Emily Miller is a fourth-year doctoral student in demographic studies and social policy and holds an RGS at Forbes. She is originally from Palisade, Colorado.

Self-essays at The Prospect give our guest writers and contributors the opportunity to share their insights. This essay reflects the opinions and lived experiences of the author. If you would like to submit a personal essay, contact us at [email protected]

How does a caterpillar turn into a butterfly? | Opinion