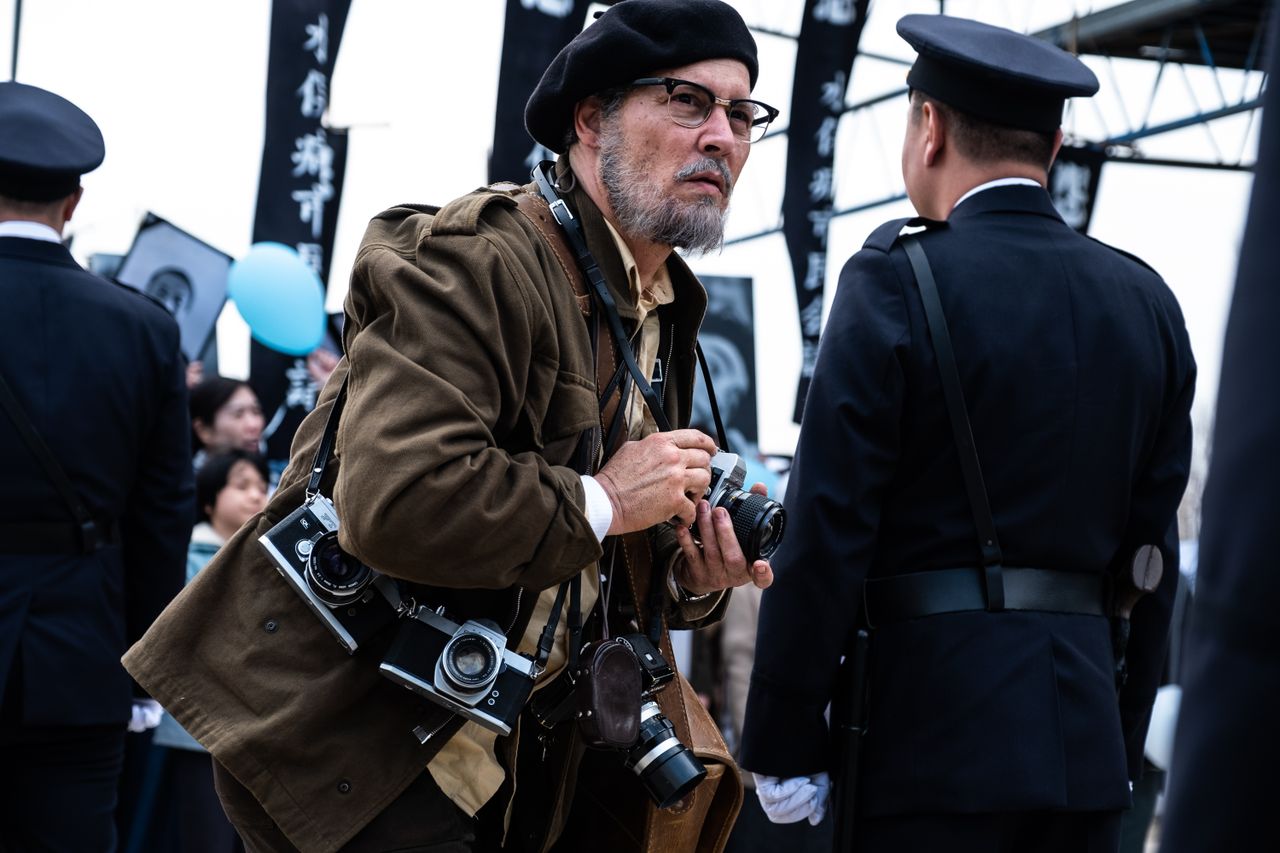 Minamata: How a Japanese company poisoned a community, and an American photographer fought to expose it

Minamata, directed by artist and producer Andrew Levitas (Georgetown), deals with the industrial poisoning of a Japanese fishing village by the chemical company Chisso and the struggle, from 1971, of the famous photo-essayist W. Eugene Smith to reveal the disastrous human consequences of this crime of company.

Local residents, having always eaten fish from the bay, noticed strange behaviors and illnesses in cats in the 1950s, and then, in 1956, the first human cases appeared.

In the years that followed, thousands of residents, including children, suffered from muscle weakness, disability, insanity, coma and death from severe mercury poisoning, with the company denying any responsibility in the health disaster.

Today 2,283 people have been officially recognized as patients and it is widely recognized that over 75,000 people have suffered from mercury poisoning in Minamata. More than 1,700 lawsuits are still pending.

Minamata is an in-depth examination of Chisso’s ruthless attempts to prevent any disclosure of his operations and the suffering of his victims. Based on the book Minamata : A warning to the world, by W. Eugene Smith and Aileen Mioko, the 115-minute film brought its director into conflict with MGM, the film’s North American distributor.

Levitas’ film was completed in late 2019 and premiered at the Berlin Film Festival in early 2020 and was due for release in the US and UK in February 2021. This did not happen.

MGM, despite some international screenings this year, has “buried” the film, refusing to announce a North American release date due to the alleged “personal issues” of the film’s lead actor, Johnny Depp. We will return to the outrageous censorship of MGM below.

Minamata opens with Smith (Depp) photographing “Tomoko Uemura in her bath,” her acclaimed snap of a mother cradling her severely deformed naked daughter with Minamata disease in a traditional Japanese bath.

The extraordinarily moving black and white image, later considered by many to be one of Smith’s greatest accomplishments, along with others from the Minamata series published by Life magazine, introduced the American and international audiences to the horror of Chisso’s mercury poisoning.

The film then looks back on a year earlier. Smith, a semi-recluse in his Manhattan loft, is unflinchingly creative. Away from his former wife and children, the famous photographer is frustrated with editors, still suffers from post-traumatic stress disorder from severe injuries and heart-wrenching experiences during WWII, and drinks heavily. (Documentary by Sara Fishko in 2015, The Jazz Loft according to W. Eugene Smith, is a precious companion in Levitas’ film [see: WSWS review and interview with the director.])

Aware of her socially conscious photographic work, Aileen Mioko (Minami Bages) approaches Smith to help her expose the situation to Minamata. “There is resistance on the ground, but we need global attention,” she said.

At first reluctant, Smith eventually decides to approach a longtime collaborator and Life editor of Robert Hayes magazine (Bill Nighy) and insists that the latter send him to Japan in order to blow up the story.

Upon arriving, Smith discovers that the villagers, after years of fighting Chisso, are exhausted and intimidated. Armed with as many cameras as the villagers could find and a makeshift darkroom, Smith works to gain the trust of the villagers and gather evidence against the company.

Smith, Aileen, and activist Kiyoshi (Ryo Kase) visit Chisso Company Hospital in disguise and photograph those most suffering from the disease. They also uncover documents showing the company withheld private research results, proving that the river’s water was indeed toxic for over 15 years.

Chisso President Junichi Nojima (Jun Kunimura) is aware of Smith’s arrival in the community and tries a number of tactics, including bribery and physical violence, to deter or block the photographer’s work.

Along with Smith’s efforts, another group represents a minority of victims still determined to fight the business. Although some fear to challenge the company, group leader Mitsuo Yamazaki (Hiroyuki Sanada), in a moving scene, urges them to continue. “It’s not just about this city,” he says. “Big companies are invading small towns all over the world and polluting their existence… It has happened before, and it will happen again!

Smith eventually gains the trust of Tomoko Uemura’s mother and is ultimately allowed to take the soon-to-be-famous photograph. This and other outstanding images from Minamata posted by Life constitutes Smith’s last photographic essay before his death in 1978.

Minamata points out that the disaster that struck the fishing community in southwestern Japan was not one-off. The film ends with a long list of similar tragedies in the decades since the Minamata disaster: mercury pollution in Indonesia, radiation at Chernobyl and Fukushima, poisoning by toxic waste from mines in Africa, Latin America and South, lead poisoning of Flint, Michigan water supplies. and many other cases.

Opinion on Minamata were mostly positive, but there were some bitter reactions from critics of Indiewire and in the United Kingdom Independent and the Telegraph. At the root of their criticism, there is an insistence that no one should get too emotional about the disaster, let alone passionately engage in exposing the plight of the victims of Minamata. Any filmmaker who ventures outside this framework is irrelevant.

“The occasional poignant observation cannot save a film that tries so hard to pull every heart at its disposal,” says Kohn, and accuses the film of “lacking the histrionic”.

Geoffrey McNab in the Independent says the movie “shoots in conflicting directions” and gives it two stars. “We don’t know if this is a social drama on a crusade or the story of the redemption of a struggling artist. The result is a film that neither engages nor moves the viewer as one might expect. “

the Telegraph declared Minamata is a “self-glorifying” biopic and accuses Levitas of “shaping the story to flatter Smith with a pretty grumbling redemption arc.”

Contrary to these arrogant and self-righteous claims, Minamata, is a passionate and perfectly objective work that reflects in a thoughtful way how Smith’s determination to expose the crimes of Chisso and the victims of society reinvigorated his creative spirit.

Although it is not possible here to critically examine the depth and significance of Smith’s body of work (see the International Center for Photography’s online collection), his contribution to photography, as a powerful journalistic tool and artistic medium, is significant and underpinned by a deep humanity.

Above all, Smith was driven by the passionate belief that fighting to expose the truth could animate others and change society for the better. As he once said, “A photo is a small voice at best, but sometimes – just sometimes – a photograph, or a group of them can draw our senses to consciousness … a catalyst for consciousness. thought.”

Although these feelings strongly underlie MinamataLevitas now faces a media society hostile to these concerns and uses a #MeToo-style campaign against Depp to “bury” the film and punish everyone involved in its production.

In 2018, Depp’s former wife Amber Heard wrote an op-ed in the Washington post, claiming to have been a victim of domestic violence. This sparked the usual media and career hysteria against Depp, who was not named in the To post story. None of the incidents Heard alleged has ever been the subject of criminal investigations, let alone charges.

Depp was quickly removed from the next scheduled production of Pirates of the Caribbean then last year he was asked to “step down” from his role as Gellert Grindelwald in the third film of the Fantastic beasts franchise. Depp’s dismissal came after losing a libel case against UK-based Murdoch owner Sun tabloid after posting sensationalist material denouncing him as a “woman’s drummer”.

Last week, Levitas went public with a letter he sent to MGM condemning the giant entertainment company. “MGM [in early 2020] intended to highlight the suffering of thousands of victims of one of the most heinous industrial pollution incidents the world has ever seen.

“By re-exposing their pain in sharing their history, this long marginalized community hoped for only one thing: to bring history out of the shadows so that other innocent people would never be grieved as they did… and it seemed at that point, with MGM’s partnership, a wish of several decades was finally coming true, ”the letter said.

“Now imagine the devastation when they learned last week that despite an already successful global rollout, MGM had decided to ‘bury the film’ (in the words of Director of Acquisitions, Mr. Sam Wollman) because MGM was concerned that the issues of an actor in the film could negatively impact them and that, from MGM’s perspective, the victims and their families were secondary to this.

Levitas recalls speaking to Mr. Uemura whose daughter “suffered every day of her life” because a “large faceless corporation failed to live up to its moral obligation to humanity, decency and righteousness.” His letter called on MGM executives to speak to Uemura and other victims of Minamata and “explain why you think an actor’s personal life is more important than his deceased children, their siblings, their parents. and all the victims of industrial pollution and corporate malfeasance ”.

The letter noted that “people around the world are victims of companies that do not value them or see them as real” and urges MGM to reverse its decision “to actively obstruct the distribution and promotion of Minamata”. It ended with a Youtube video of one of the victims, Shinobu Sakamoto, recounting his experiences.

MGM responded with a contemptuous and innocuous statement. “The film was acquired for release through American International Pictures, a division of MGM which manages day and date releases. Minamata continues to be a part of future AIP releases and at the moment the film’s US release date is to be determined. [to be announced]. “Any decision by MGM, currently taken over by Amazon, will undoubtedly be influenced by economic calculations.