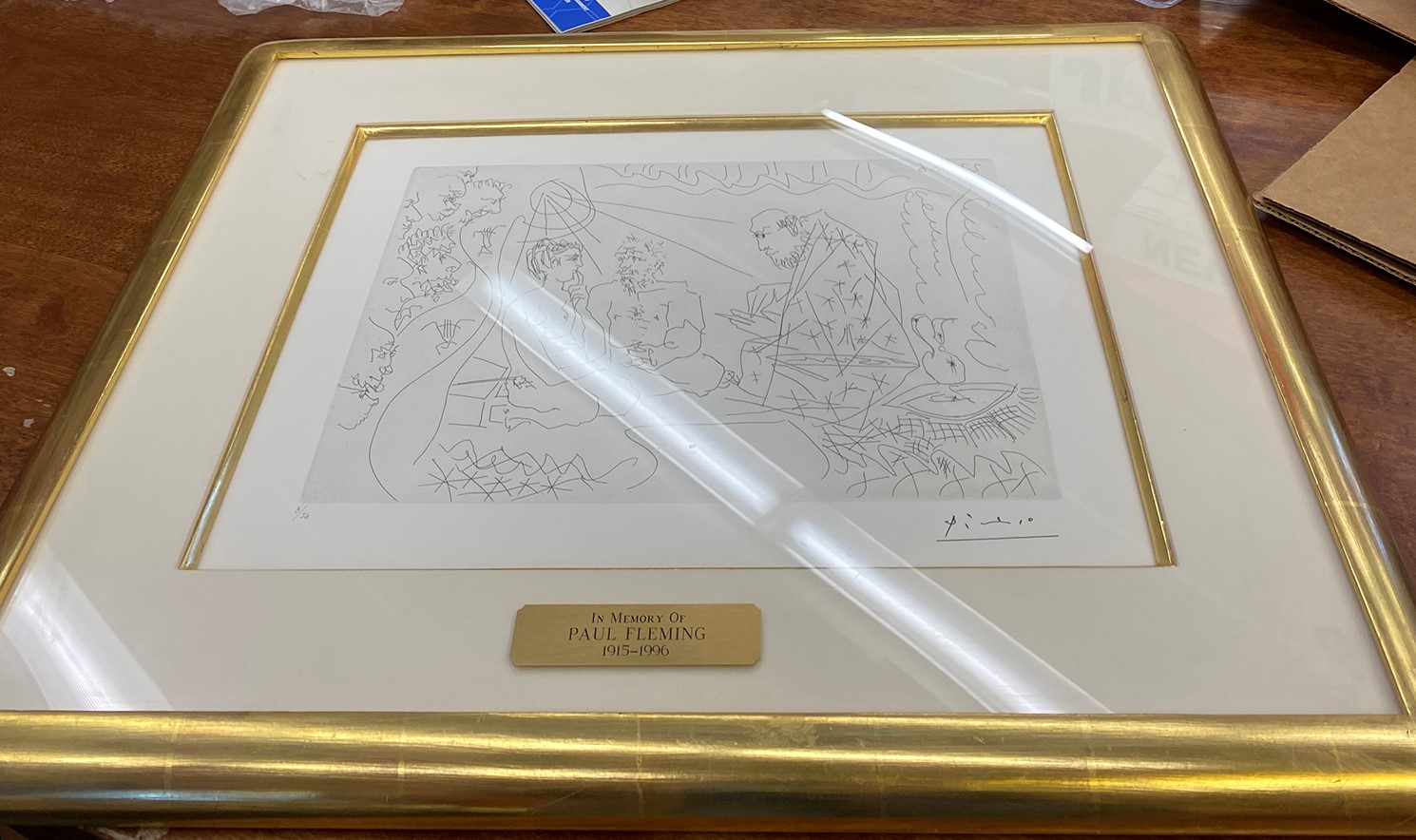 JERSEYVILLE — An etching by artist Pablo Picasso has been auctioned in New York to benefit the Jerseyville Public Library.

The print had been in the library’s possession for more than 25 years, being moved from place to place without much fanfare, said Beth Smilack, the library’s social media and communications librarian.

“I was chatting with one of my colleagues,” Smilack said. “One way or another, works of art appeared. She said, ‘You know we have a Picasso, right?’ … Sure enough, she took me into the non-fiction room and it was right there, on the wall.

Smilack looked around online to see if she could determine if it had any value, initially having no luck.

“I found a lot of similar footprints, but ours didn’t show up,” she said. “I thought maybe it was a little more valuable because there weren’t that many there.”

When she searched a few months later, Smilack found one that had recently sold for around $3,000 at the Phillips auction house and gallery in New York. She spoke to library director Anita Driver, then to the library board before emailing the gallery.

After explaining what the library had – print No. 8 of a hand-signed limited edition of 50 copies of Picasso’s play “At the theater: L’Astrologue (At the theater: L’astrologue) (B. 1425, Ba. 1453)” – Smilack requested details of its value and gallery fees.

“I knew they would charge a commission,” she said. “I didn’t know if it was worth it. The gentleman replied to me fairly quickly by e-mail – they were interested.

Smilack had also included information about the library’s history as the Carnegie Library, its 1987 expansion, and its ongoing efforts to grow again. The gallery agreed to run the piece without taking a commission, so the full sale price — in this case, $4,032, according to Phillips’ website — would benefit the library.

“We really had no idea” of its value, Smilack said, noting that the print was donated to the library by Paul Fleming’s family. “I was hoping it would be okay at least for what the other one had, which was around $3,000.”

The auction price of $4,000 will benefit the library’s expansion effort, which is struggling to become a reality in the pandemic-hit economy, Smilack said.

According to a library announcement in August 2020, the library received a grant to help fund a $3.7 million construction project that would more than double the size of the library.

But before things opened up enough for the library to start working on the expansion plan again, construction prices had skyrocketed amid shipping issues and labor shortages. .

“We asked for what we thought we needed,” Smilack said. “When we got (the grant), that would have been enough.”

The library expects to hear more about the future of its expansion effort towards the end of May, when the library board meets. Regardless of the resulting decision, the expansion is still necessary, Smilack said.

“Over the years, as our community has grown, we’ve seen more and more people using the library for different things, like events, meetings, tutoring,” she said. . “…We have regular groups that meet here, like housewives groups and Daughters of the American Revolution.

“Our conference room is a decent enough size but it has no storage. The chairs are lined up along the wall. Our teenager room is small and we have more teenagers coming. … There is just a great need and not enough space.

Jonathan Self: What I Discovered When I Finally Read a Book I’ve Wanted to Read for 40 Years