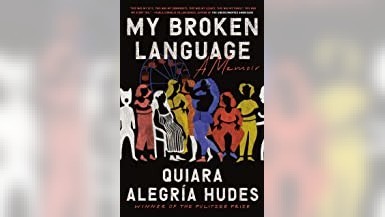 National Hispanic Heritage Month runs from September 15 to October 15. It is a celebration of the stories, cultures and contributions of American citizens whose ancestors came from Spain, Mexico, the Caribbean, and Central and South America.

We invite you to visit the AK Smiley Public Library and browse our wide selection of fiction and non-fiction books celebrating the richness of Hispanic heritage. Here are some of our favorites.

Quiara’s new memoir Alegría Hudes, “My Broken Tongue,” chronicles her childhood with an atheist white father and a practicing Puerto Rican mother Lukumí in West Philadelphia. “Who Who” grew up fascinated by her mother’s extended family, but didn’t know where she fit in. The family alternated between English and Spanish depending on whether or not her father was at home, resulting in Hude’s titular “broken tongue”. Hudes describes her long-standing obsession with language and music, which culminated when she attended Yale and Brown universities and became a renowned playwright. This book is a joyful and thoughtful examination of identity, belonging and community.

“Gordo,” a short story collection by Jaime Cortez, takes us into the world of a teenage son of migrant workers in the Central Valley of California in the 1970s. In each story, Gordo navigates between his two worlds: college and the fields. Along the way, he fights bullying, bodily issues and homophobia. Gordo is smart and kind, but also painfully aware that he does not meet the cultural expectations of Mexican-American men, to the disregard of his father and his classmates. The stories in this coming-of-age tale range from sweet funny to heartbreaking. Gordo is a character who will touch your heart and stay in your mind long after the book closes.

“Horizontal Vertigo: A City Called Mexico,” written by Juan Villoro and translated by Alfred J. MacAdam, explores the vast history of Mexico City, where Villoro was born and raised. His essays combine history, personal memories, and observations of the city’s sprawling form, which was built horizontally because of the earthquakes that rocked the region through the ages. Throughout its complex history, Mexico City has earned its reputation as both a dangerous landscape and a thriving metropolis. Villoro skillfully takes the reader through the city with a personal touch. If you love to read about travel and history, you will definitely enjoy this one.

Fans of magical realism will appreciate “The President and the Frog” by Carolina De Robertis. This novel tells the story of the aging former president of a Latin American country (the real country is not revealed) who is interviewed by a journalist about his story of leading his country out of violence and towards peace. Once a tyrannical guerrilla fighter, the former president reveals he discovered the path to peaceful leadership while in solitary confinement as a political prisoner with only a loud, talkative frog for company. Maybe this Talking Frog was real and maybe he wasn’t, but that doesn’t really matter, as the President gives him credit for teaching him how to come out of darkness. De Robertis’ lyrical prose, imbued with a symbolism that rings true in these troubled times, is sure to captivate you.

All of these books and many more can be found in the new books section. We also have many books in Spanish in our collection of world languages. Come take a look!

BONOKOSKI: The media favor diversity. Let the students stand up