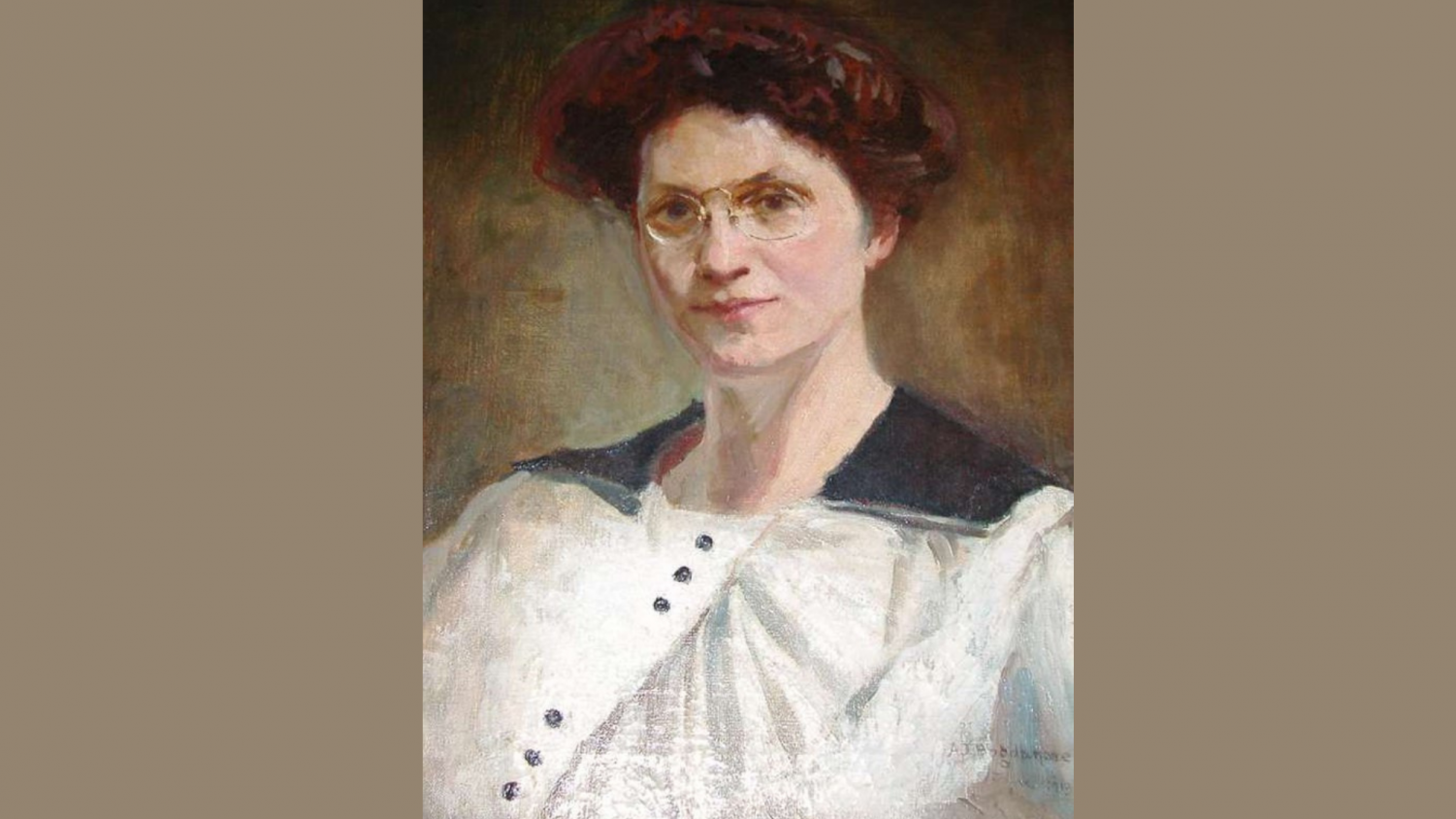 Do you know this Jew? She has been nicknamed “The Betsy Ross of Israel”

She has been nicknamed “the Betsy Ross of Israel”.

Passionate, adventurous, attractive, well educated, traveler of the cosmopolitan world and talented organizer, Rebecca Affachiner led an extraordinary life at the beginning of the 20e century, as a practicing, practicing single Jewish woman, as a childless woman deeply involved in the lives of children of all ages, and as a woman who has traveled the world without a chaperone or companion.

Rebecca was born in Nesvizh (present-day Belarus) in 1884 to the Sephardic family Affachiner who had lived there since the beginning of the 19th century.

His father Yitzchak worked as a tailor until he immigrated to New York in 1888. There he opened a tailoring store, which remained closed on Shabbat for his entire working life – almost unknown at that time. After arriving in New York City in 1890, Rebecca and her siblings attended public school in 1890, where Rebecca developed a passion for reading. Rebecca bought a 2-volume collection of poetry from Emma Lazarus, who became her heroine, and took it everywhere, including Jerusalem. She became skilled in writing and oral presentations, participated in debates from an early age.

Unusual for her time, she decided to take training as a professional social worker, then enrolled in the new evening course for teachers at the Jewish Theological Seminary in December 1904.

At JTS, she befriended Solomon and Mathilde Shechter, as well as Henrietta Szold who was also a student there at the time, but it was Rebecca who became the first woman to graduate from JTS in 1907.

In 1908, although not a rabbi, she became Jewish chaplain at the Home for Delinquent Girls in Hudson, New York, and would undertake many initiatives to provide positive role models and support to underprivileged Jewish girls in New York City, as well as fight against proselytizing efforts.

After coming to a meeting on February 22, 1912 organized by Henrietta Szold to create an official organization of Zionist women, Rebecca became involved in the Federation of American Zionists and, being more educated than most of her contemporaries, Rebecca quickly became a central element of the group. .

A few years later, she became involved in a major American Zionist campaign to get President Harding to accept the Balfour Declaration. In 1921, when Chaim Weizman and Albert Einstein toured America on a well-known mission to encourage support for Zionism, she hosted an event with them and raised $ 25,000 from her local community in Hartford, Connecticut, a princely sum at the time.

The year before, she had become superintendent of the United Jewish Charities of Hartford, the first woman to hold such a prominent position in a Jewish organization in America. She founded the Big Brother and Big Sister Jewish Sections in the city and led countless other efforts to help those in need, including helping to organize a boycott of streetcar transport throughout the city when the fare was reduced. increased to 10 cents each way. The strike was successful and the price fell to 3 cents!

It should be remembered that women did not gain the right to vote in the United States until August 1920. Rebecca’s accomplishments took place at a time when women’s rights were still severely restricted in many areas of their life. life, including real estate.

Throughout the 1920s and 1930s, Rebecca traveled the world, partly for her leisure time and partly to better understand where Jews could find refuge.

After the United States severely restricted immigration in 1924, Rebecca and others saw Mexico and Cuba as potential safe havens. herself wrote a report on the Jewish situation in Cuba for Louis Marshall, the famous jurist who headed the American Jewish Committee at the time.

Later, traveling through Italy on vacation, she had an audience with the Pope hosted by Catholic friends of hers and even had the privilege of seeing rare Hebrew manuscripts in the Vatican library. Rebecca arrived in Jerusalem two days before Tisha Be Av that year. In Jerusalem, she visited the newly founded Hebrew University on Mount Scopus, as well as other sites, meeting such figures as Dr. Judah Magnes, the university’s first chancellor.

Upon her return to the United States, she lectured on Palestine and was quickly hired by Hadassah to organize new chapters. In the late 1920s, Rebecca saw the Zionist movement as a major opportunity for Jews to create the new Jewish homeland after centuries in the Diaspora. She also recognized the need to create a reliable health system with Hadassah Hospital as a touchstone.

In 1929, she defeated four male candidates and was elected delegate to the World Zionist Congress in Zurich. Although she did not have the funds to attend, Rebecca continued to be heavily involved in Zionist activities. That same year, she became director of social services for the long-established Jewish community of Norfolk, Va., And there founded one of America’s first Jewish community centers. This decision also made her one of the few Jewish professionals to have a major impact on communities in the North and South.

Connect with your community every morning.

“There is no reason why three racial groups of different traditions and cultures cannot live harmoniously as a unit under one government.”

Rebecca quickly got involved in life in Jerusalem, working with Dr Henry Keller to help establish Alyn Hospital for Children with Disabilities, and as director of social services.

As the Holocaust drew near, she traveled to Romania and other countries in Eastern Europe, working to encourage immigration to the Land of Israel, while back in Jerusalem, she organized activities and initiatives to help get disadvantaged children off the streets, just as she did back then. in the USA.

Although linked to Recha Frier and Henrietta Szold of the official Youth Aliya movement, Rebecca felt the movement involved too slow a process and too much paperwork. In 1939, she herself organized and paid the costs to bring a group of 20 young Romanians to Israel on one of the last boats fleeing Europe before the war.

During the Holocaust, she helped Szold absorb refugees, including the “children of Tehran”, and after the war she became increasingly involved with the International Red Cross as she developed a important import company to meet its needs.

Despite warnings from the US government to flee for safety reasons, Rebecca and others like her remained during Israel’s 1948 War of Independence.

“I cannot abandon my sisters and brothers,” she reportedly told a local newspaper at the time.

“I have waited all my life to see the rebirth of a Jewish state. I don’t intend to miss it.

Upon hearing that David Ben-Gurion declared the State of Israel on May 14, 1948, Rebecca sewed and flown the first flag in Jerusalem that day – after coloring the stripes blue and the Star of David on a sheet. with a blue pencil!

Historian David Geffen coined Rebecca “Israeli Betsy Ross” in his essay on American Jews in Israel, which was published in the New Encyclopedia of Zionism and Israel.

For the last years of her life, she hoisted the flag on each Israeli Independence Day.

As Rebecca fell worse and worse in 1966, her good friend and caregiver Ezra P. Gorodesky slept on a chair in her living room for a month before moving to a nursing home, where she died.

Before her death, she gave the flag to Ezra, making him promise to take good care of it because “it was my personal way of welcoming Israel into existence.”

In 2018, Ezra donated the flag made by Rebecca in 1948 to the Ben Gurion Archives at Ben Gurion University in the Negev. Ezra P. Gorodesky died in 2020.

This article was published as part of Gesher Europe, the initiative of the National Library of Israel to connect with people, institutions and communities across Europe and beyond, through storytelling, knowledge sharing and community engagement. It has been republished with permission.