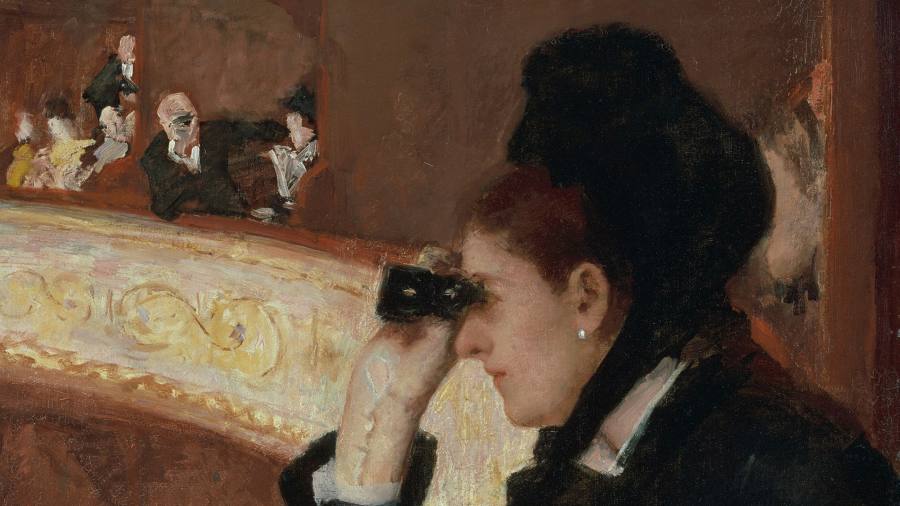 Sign up for myFT Daily Digest to be the first to know about the latest in the visual arts.

In Mary Cassatt’s 1878 painting “In the Lodge”, the American artist captures the spectacle of looking into late 19th century Paris through a complex web of gazes. As a viewer, we observe the side profile of a woman at the opera house looking through her glasses at an unseen audience member in front of her. In the background, a man leans from his box to try to spy on the woman through his own binoculars. The image is a scene from modern life, but it is also a portrait that captures the confidence of the viewer.

The Cassatt Operator is one of many works by eight female painters and a photographer who play with portraiture conventions in a lovely new exhibition, To close, at the Beyeler Foundation in Basel. Spanning from 1870 to the present day, the exhibition examines parallel developments in Western art that have affected the way we understand the human figure: the rise of the professional female artist and the estrangement of the portrait from her. long-standing goal of faithfully reproducing the likeness of the model.

By mapping a formidable line of women working with the figurative image – Cassatt, Berthe Morisot, Paula Modersohn-Becker, Lotte Laserstein, Frida Kahlo, Alice Neel, Marlene Dumas, Cindy Sherman and Elizabeth Peyton – the exhibition highlights the contribution from these artists to the radical transformation of the genre.

Refreshingly, the exhibition resists imposing an all-encompassing “feminine gaze” on the works of these women by grouping their works together through common themes. Instead, each artist is assigned their own room to emphasize that they have produced art under particular circumstances – as the varied treatment of the human figure reveals throughout the exhibition.

We begin in the Paris of the 1870s, where decorum dictated that Cassatt and Morisot limited themselves to capturing their friends and family primarily in domestic settings (Cassatt’s “In the Lodge” is one of his rare paintings of the sphere. public). But that did not prevent them from engaging in the formal experiments of their Impressionist circle. Morisot in particular breathes dynamism into interior scenes through the rapid application of paint: the vivid dark blue background rendered in rapid brushstrokes contrasts with the white arms and face of the bored young girl practicing painting. music in “Lucie Léon au piano” (1892); the vivid details of the lace garments and the expressively raised eyebrows imbue the young woman reclining in her chair with a quick wit in “Girl on a Divan” (1885).

Very early on, we also see modernist artists wresting the female figure from the stereotypes of art history. The German Modersohn-Becker, one of the first female artists to portray herself naked, rejects the eroticization of her body in “Self-Portrait (Semi-Nude with Amber Necklace II)” (1906). She renders her nude form in simplified forms with a dark, almost mask-like face, confidently meeting our gaze, mimicking what the artist has described as the “masculine and daring” attitude of the modern woman.

Working in the Berlin of the 1920s, Laserstein also presents herself as a new emancipated woman. She claims a position in the canon of art history with the remarkable work “In My Studio” (1928), which shows the artist at his easel, cropped hair and androgynous air, in a profound sense. concentration as she paints the nude model. stretched out in front of her, whose radiant body rendered in sensual realism recalls the paintings of Titian.

Neel’s penchant for painting elongated, fleshy forms produces what is perhaps the most confronting nude on display. In “Pregnant Woman” (1971), the American twists the traditional odalisque pose by representing her daughter-in-law lying naked on a sofa, weighed down by a heavy and distended belly. The model’s outspoken expression expresses Neel’s perspective on pregnancy as “a fundamental fact of life”, but is also an excellent example of the intimacy the artist has created with her subjects as a chronicler of the New York daily.

Through this variety of the human form, the exhibition traces the radically changing vision of the subject through this period. We are seeing definitions of ‘individuality’, once a vital feature of portraiture and in particular the self-portrait, shifting, shattered and sometimes completely rejected as we move from the modern age to the age of social media.

For Kahlo working in Mexico City from the 1920s to the 1950s, individuality meant a highly constructed character within imaginary settings. “Self-Portrait with Bonito” (1941), painted shortly after his father’s death, shows the artist posing against a backdrop of a rich jungle teeming with plants and insects, a scene that contrasts her black dress and somber expression. It is an image that testifies to the deep fascination that the artist had for the cycle of life and death throughout his career.

These symbolically charged self-portraits are hardly real, but they are nonetheless authentic. Compare how different this constructed identity is from Sherman’s photographs, where the artist is buried in so many layers of disguise that one could hardly qualify his works as “self-portrait”. The concept of individuality is further blurred in the practice of Dumas, born in South Africa, who gleans her subjects in the media and enjoys separating images from their origins. The artist’s intense and paint-smeared faces, often depicted close-up, with snarling mouths and large eyes, are totally foreign to the newspaper photographs from which they are derived.

Coming finally to the little jewelry-like Peyton paintings, one can’t help but feel a sense of coming full circle. They have a common artistic language with the previous pieces: both his “Lara, garden, autumn” (2020) and “Jeune femme à tricoter” by Morisot (c1883) depict a figure in the garden with colorful spotted brush strokes. , two self-determined women contained in their dream world. The young man rendered in deep indigo in “Nick (La Luncheonette December 2002)” (2003) shares an introspective and brooding quality with Dumas’s blue portrait of the late singer Amy Winehouse (“Amy – Blue”, 2011). Here there is warmth and darkness, friends and strangers, studies of the individual but also of the collective.

As the critic Donatien Grau writes in his catalog essay on Peyton: “A portrait does not have to be the image of an individuality, conceived as an island that no one other than the portrait painter can access. A portrait can be the way to dive into the sea of ​​life.

Misogynist attacks, accusations of “interference” by Sawant, as carpenters’ union goes on strike

Thomas Mann on the Artist Against the State