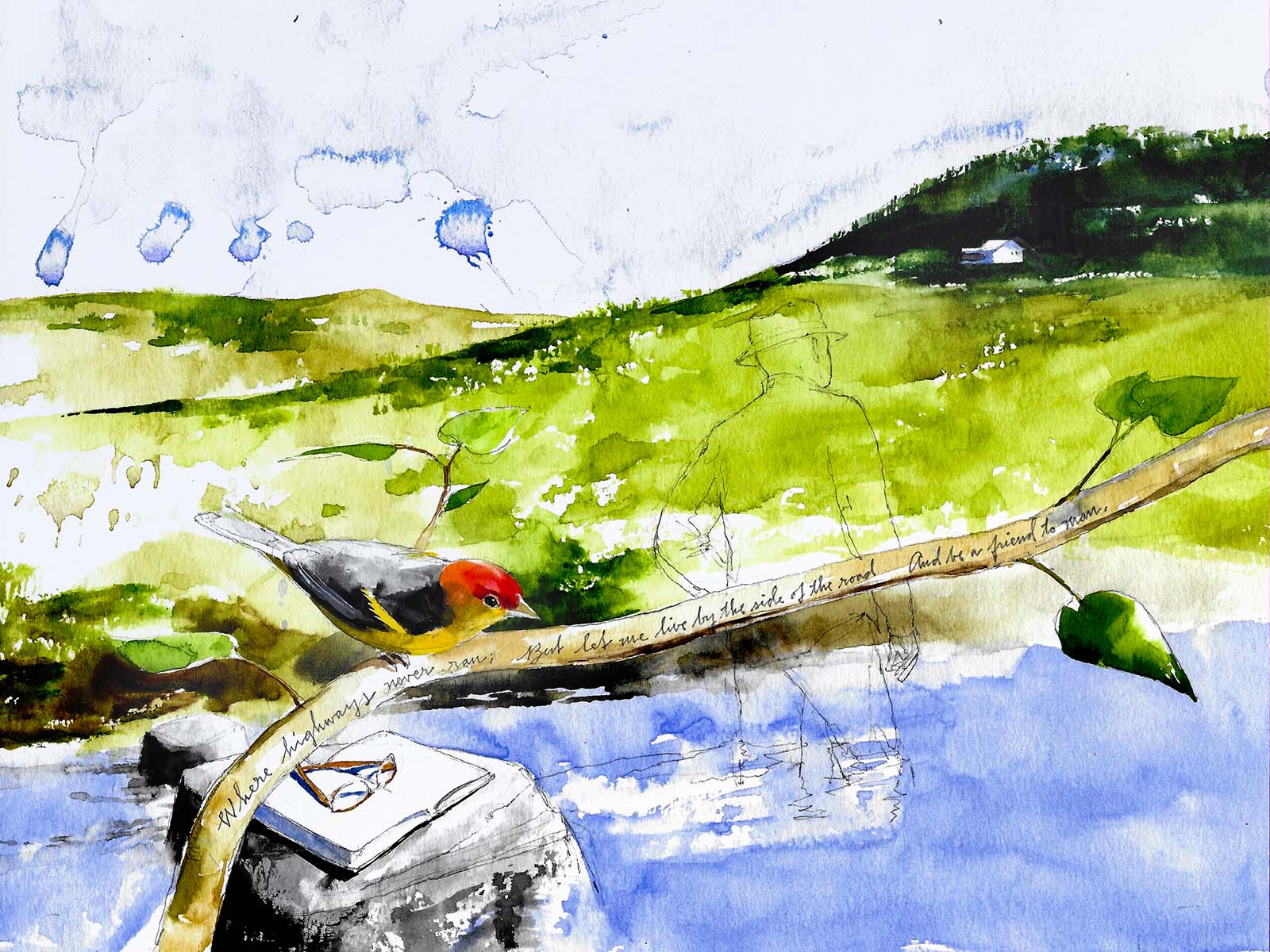 A venerable friend stops one day to recommend a poem. He’s about to fish in the Colorado River, which flows between our homes, but instead steers his old truck down our gravel driveway, apparently for a singular purpose. His name is Walt. He was once a big bond trader on Wall Street. He is difficult to reach now because he never answers his phone. “I’ve spent too many years with one of these things stuck in my ear,” he says. I didn’t know him then. I know him just now, as the 84 year old man who says goodbye to his wife every spring, moves away from his home in New Jersey and, six months a year, lives alone in a hayfield in Grand County. .

During his annual Colorado romance, Walt reads heavy and important books. (He has just completed a more than 800 page biography of Mao Zedong.) He listens to music. For exercise, he cycles eight kilometers into town and rewards himself with breakfast. Some days he fishes. Then, when the weather in the Rockies becomes less hospitable in November, it returns to the east coast. It’s the same routine for decades.

When I tell people about Walt, the reaction is predictable and universal: Now there’s a guy who got it all.

That’s why I’m always happy to see him spinning in our driveway. He comes out and approaches the porch where I am sitting. Sometimes I work there. More often than not, I don’t. On this bright, clear day, I just sit and reflect, greeting casual passersby like a Walmart host. Either way, Walt says my presence on our porch reminds him of a poem. He does not remember the name of the writer, but he does remember the title: “The house by the road”.

“Look for him,” Walt says, and after he leaves, I do. It’s by the late Sam Walter Foss, and it starts like this:

There are hermit souls who live in seclusion
In the peace of their contentment;
There are souls, like stars, who dwell apart,
In a firmament without a companion;
There are pioneer souls who make their way
Where the highways have never run; –
But let me live by the side of the road
And be the friend of man.

It occurs to me how blessed I am to have come to a time and place in life where a learned friend feels free to stop suddenly just to recommend a poem.

Like most people we know, my wife and I have spent decades buried in the bittersweet mania of city life. Head down, we’ve been through a triathlon of demanding professional lives, active kids and endless obligations demanded by both. I marvel that we have managed two full careers (me as a writer and editor, her as city manager) without ever being fired or fired, raised two children who seem reasonably happy and never had a serious health problems.

We are privileged, without a doubt. And lucky. But we also made a lot of choices that got us to this particular porch. We have always lived simply and within our means. We drive our cars for a decade or more. We pay our credit card bills in full each month. Vacations? We took them, but we always waited until we had the money to pay them. It turns out that deliberately living all of these years has finally given us an incredible end-of-life opportunity.

I have always believed that our lives, like most good stories, unfold in three separate acts. In the first act, we become who we are and set a course for the future. In the second act – the “cloudy environment”, I call it – our lives become more and more complicated. Conflicts arise. The drama ensues.

The third and last act is the most difficult, in fiction as in real life. We really want it to end well. If this final act seems illogical or deeply flawed, the resolution is unsatisfactory. No one wants to see their own story as inconclusive or an unfortunate waste of time. So as we approached our 60th birthday, my wife and I found ourselves fortunate enough to make a deep choice: what did we want our third act to be?

For years we had invested part of our earnings in a house my older sister built it on a few acres just outside of Granby. She was a soul of incomparable kindness and she designed the kind of place that had the power to instantly melt the tension off our shoulders every time we rolled down the aisle, to make us forget the urban stress in our rearview mirror and make us say, “Aah. “My sister, a mother of six, spent 18 years there, mostly alone, creating a precious private place where she could spend her days exactly as she wanted. Between visits from her children and grandchildren, she would sit on the porch, smoke, think and watch the world go by. I think she, like her friend and neighbor Walt, had it all figured out.

When my sister passed away at 72 in September 2015, we considered our options. Selling the place seemed wrong, and we never gave it serious thought. But keeping it meant moving from the teeming Southern California landscape where we experienced our hectic second act to a ranching town of around 2,000. It meant leaving behind the security of a satisfying job, longtime friends and our grown children. It meant finding a way out of our quick lives and starting over, engaging in a way of life unknown thousands of miles from anything we had known.

I had a model. In 1938, writer EB White left a meteoric career in Manhattan and turned to the Maine countryside. His collection of essays from this period, The meat of a man, reads to me like an escape fantasy, as it unfolded during the White Generation. Without this decision, he could have worked the rest of his career among the skyscrapers of Manhattan, and the world might never have received the gift that is. Charlotte’s canvas.

White may have spoken well for my wife and I as well when, in an interview in 1942, he said he had moved to a remote farm “because it was something we had always wanted to do and that we could do…. A lot of people in New York seem to think that going to live on a farm all year round, especially a farm this far away, is some kind of affection. They seem to think that you have to be either washed or very rich to do so. But we just wanted to do it.

In the spring of 2016, we were convinced that the universe was sending us a clear sign, a flashing arrow directing us to a clearly marked exit. We weren’t entirely sure if I could find enough work to make it possible, or how exactly the bookkeeping would play out, but we envisioned a satisfying third act set amid Grand County ranches and nature. accessible wilderness.

Historian Robert C. Black III once referred to the county as the “Island of the Rockies,” and even in Granby, its largest city, it remains true today. The westward migration brought many settlers to the base of the mountains that rise just beyond Denver, but they tended to move beyond Grand County and the Continental Divide like a stream flowing past a massive rock. It was just easier to go around than to finish it.

Accordingly, this part of Colorado central park is still relatively sparsely populated. We are currently witnessing a land scramble triggered by a pandemic fueled by remote workers fleeing cities, and we cautiously note the growing number of Teslas and Range Rovering Realtors on skis walking past our front porch. But for now, we can still get fresh eggs from nearby breeders and pay for them by leaving money in an honor box. The woman who ran the local post office always greeted us by name and rarely had to ask for our box number when we were picking up a package. We are listening to nature like we have never been before, and for the first time, we are enjoying life on a human scale. Five years later, we have slipped into a happy slowdown.

Our choice to live by the side of the road may not work for everyone in this hyper-wired and needy world. There are undeniable pleasures to living in a place where you can enjoy good Thai food whenever the mood strikes you, or where getting to an airport doesn’t involve serious logistical calculations. But this life suits us. Even if we consider the cost of dining out more than before. Even if we limit our movements to places where dogs can come. Even though we struggled to pay for health insurance until Medicare went into effect.

Regrets? Not one. Our third act, so far, has been the energizing revelation I hoped it would be. It’s true, the world can miss me. I agree with that and find the distance and loneliness invigorating. My role now, as I see it, is to greet and wish these travelers good luck. Or, as the last stanza of the Foss poem says: