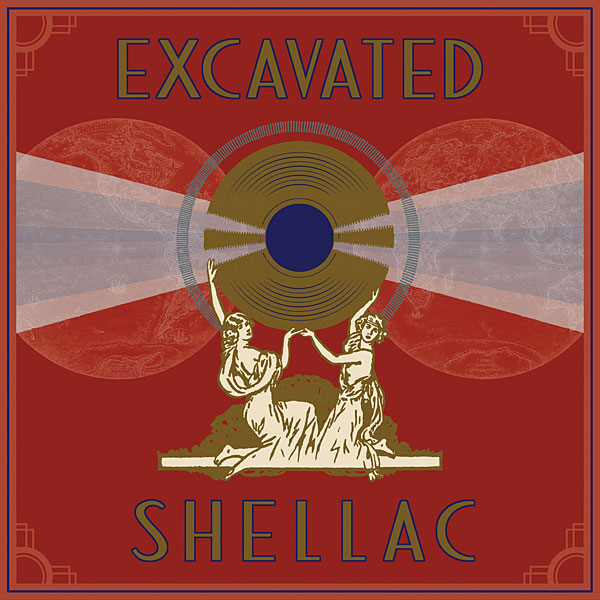 Jonathan Ward, a recorded sound historian, has some startling news. Thousands of 78 rpm recordings were made not to preserve music, but as disposable material for the sale of gramophones. As the makers hoped to expand their sales globally, the demo discs featured regional music aimed at appealing to the regions. On his blog excavated shellac—and now on a 100-track compilation, Excavated Shellac: An Alternative History of World Music (1907-1967), curated and produced by Jonathan Ward and remastered by Michael Graves—Ward has lovingly plucked a selection of these artifacts from the trash heap of music history and unearthed background information about each in a feat Herculean research. His work exposes a rich and hidden world of recording.

This endlessly fascinating collection, which can be downloaded as 16/44.1 WAV, FLAC or MP3 files plus a 186-page PDF book, was nominated for a Grammy Award, an honor already bestowed on Ward’s 2013 compilation, Opika Pende: Africa on 78 rpm. In Shellac’s informative introductory essay, Ward explains that he decided to refer to this music collectively as “world” because “ethnic” and “world” music historically involves non-white and non-Western repertoires. . All of these recordings, which the record companies considered disposable, are in fact priceless.

Shellac, Ward explains, is a resin secreted by the beetle and dissolved in alcohol. 78s made from this substance are brittle (hence the switch to softer vinyl), which makes Ward’s many discoveries all the more remarkable. One of the many startling revelations is that some companies continued to press shellac 78’s into the 1960s in some areas because there was no economic impetus to change.

The sound quality of these rare old records varies enormously. Graves, the engineer, did an incredible job of preserving the tracks digitally. On some of them, like the Saramacca Band recorded in Suriname in 1922, Graves seems to have derived a viable sound from pure distortion. On the other hand, on Irish piper Liam Walsh’s 1925 recording, the Gramophone Company had just begun using microphones instead of sound-capturing horns; it has a depth and immediacy not associated with 1920s recordings.

The material is grouped into four parts of 25 tracks each, but with no overarching themes that I could discern. The PDF book provides detailed notes on each track, information on traditions, artists, and even recording techniques when known: the equivalent of one of Ward’s blog posts. The book’s background includes a condensed track listing, a discography of original labels and catalog numbers, and an extensive bibliography of further reading on the traditions reflected in each recording.

The book is beautifully laid out by art designer Barbara Bersche, illustrated with high-resolution images of records and labels, early 20th century advertisements and artist promotional photos. Each vocal track is accompanied by lyrics in the original language, with translations, making music that may sound exotic and understandable to anyone. But, incredibly, despite all that great content, the eBook doesn’t contain internal hyperlinks to the main TOC or track listing entries, so you have to manually scroll to reach what you need. It quickly becomes frustrating.

Ward introduces listeners to many artists famous in their time and place, but unknown after and beyond. For example, the opening track is a choral song with ragtime-like piano accompaniment by Reuben Tholakele Caluza, “perhaps the most important South African musician and composer of his time”, according to Ward. On the other hand, some tracks represent types of traditional music with no commercial prospects at the time they were recorded, such as the “raw style” of the music of the string orchestra Veracruz jarocho played on a 1937 record by Trio Medellín .

The presence of female artists is disappointing, but the blame does not lie with Ward. Between traditions favoring male musicians and the preconceptions of early ethnomusicologists and record companies, the vast majority of artists recorded during these decades were male. The handful of women’s tracks include Che Ta’seah, a Ronggeng singer from Malaysia, the Portuguese cantadeira called simply Margarida, and the Russian “white-voiced” duo of Klaudiya Kotok and EM Shishova.

Among the intriguing insights Ward imparts is the fact that Iran was one of the fastest growing early markets for phonographs. The Persian virtuoso Hosseingholi Tatayy seems to draw the sounds of three instruments from his violin on the melody “Shur”. From neighboring Iraq, Ward offers a more politically weighted track: Kurdish bards like Kawîs Axa defiantly sang their traditional stories despite ruthless oppression.

Some leads exist in spite of the phonograph industry rather than because of it. Mongolian throat singing was recorded on record in 1938 by pioneering Japanese ethnomusicologist Hisao Tanake. It is a very rare recording because Mongolian music was largely ignored before the 1950s. This is partly, Ward explained, because the two major phonograph companies divided Asia in a way that excluded Mongolia of the two markets. But Mongolia was not the most ignored region. “Sahara music on 78 is almost non-existent,” Ward writes. He found some, of course: the song “El Khar” by Adja Mint Aali, recorded in Mauritania by the French businessman Louis Fourment on his N’dardisc label.

Ward seems to view this project, and the ongoing work of which it is a part, as a civic duty. In his introduction, he writes, “It is no longer enough to simply own rare music as a collector without somehow sharing it and learning more. If it continues like this, all the musical traditions of the world will become widely available.