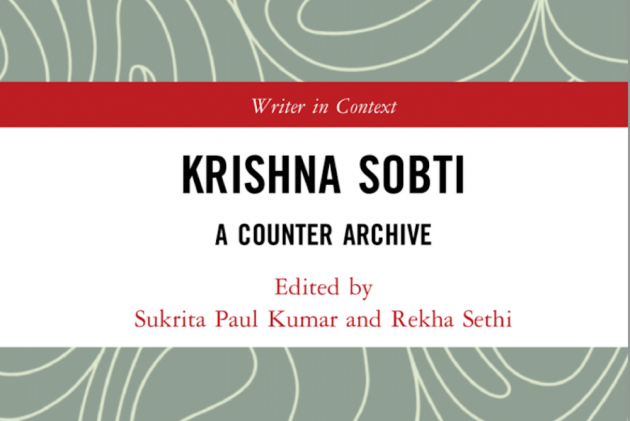 Book extract | Life is not a straight line: a new insight into the rich work of Krishna Sobti

Routledge’s “Writer in Context” series has been designed to facilitate a comprehensive understanding of Indian writers of different languages. In each volume of the Series, an author of post-independence multilingual Indian literature is presented within his socio-literary tradition. Each book presents the work of the writer as well as its cultural context, its literary tradition, its critical reception and its contemporary resonance.

The series will serve as an important creative and critical resource to fill a glaring knowledge gap regarding the context of Indian writing in different languages. Twelve books in the series are planned at the moment.

The writers chosen belong to the poet-independence period. Some of them are Krishna Sobti, Joginder Paul, Indira Goswami, Amrita Pritam, Venkatesh Madgulkar, Mahasweta Devi, Phanishwarnath Renu and others.

The inaugural volume of the “Writer in Context” series is “Krishna Sobti: A Counter Archive”, edited by Sukrita Paul Kumar and Rekha Sethi.

Here is an excerpt from the introduction to the book written by Sukrita Paul Kumar and Rekha Sethi:

“The romance of life is not in a straight line. Things would become stale if that happened. So said Krishna Sobti, who for almost a century of his life never allowed life to be a straight line, especially if the trail was to be traced by others. This is how she never let life get bland.

We believe this was the primary context for the life vision or perspective she was built upon, both in the lifetime of her life as well as in the fiction she created. In order to keep her life romance intact, she was extraordinarily alert to the various sounds and sights emitted by people in different places she was, be it Gujarat (Pakistan), Calcutta, Delhi or Shimla. Imbued with the historical echoes of the past and reacting strongly to the political and sociological atmosphere of the present, she is ardently committed to blazing the trail of a democratic and polyphonic social environment for the future. Disturbing images of the bloody Anglo-Sikh battle of Chillianwala in 1849 weighed heavily on her child’s mind, as she recounts in her untitled, unpublished article, which she shared with us:

As we children stood on a mound of kutcha, we imagined the horses, the soldiers with glittering swords, and the Topkhana that destroyed our forces. I remember clearly, my throat was choked with emotion – I understood the meaning of being a defeated people. Suddenly the faces of my father and my grandfather floated before my eyes; they are the ones who work and walk in the corridors of the secretary, symbol of British sovereignty. We are not free. We are slaves. *

With this story floating through her mind, even as a child, she understood perfectly why Indians were not allowed to skate on the Shimla Blessington Rink, intended for use only by the British. It was this alert awareness of the history of colonial India that squeezed the need for independence from the British and also defined the idea of ​​individual freedom for her, to be free from all diktat establishment or power centers above. Retaining this individual memory in the context of a larger historical consciousness, Sobti lived with a deposit of a counter-archive in itself. In 2010, when she refused to accept the Padma Bhushan Commendation, a prestigious award offered to her by the Indian government, it was above all, as she said in an interview with The Indian Express, “for keep his distance from the establishments’. Its efforts to safeguard its autonomy have been amply demonstrated by such decisions and choices. In fact, as an extension of this characteristic, his concern was also to establish his distinct identity with his heightened awareness of his lineage. She would often say to me with a glint in her eye, “You know, my ancestry goes back to Greece. She continued, “Can you please do some research for me on Google; can you find the picture of the ancient greek coin which i know has the name “Sobti”? »I tried but couldn’t find any. She also wrote in the same article previously mentioned:

My ancestors came from Greece to Ghazni and somewhere over a period of time migrated to central Punjab, the city of Gujarat, on the bank of the Chenab river and in the foothills of Jammu and Kashmir. It was a part of Saptasindhu, when Alexander came to India, the Greek governor Sohytus ruled over this province. When the Sobtis became Indianized or were Indian citizens in Greece, we have no historical evidence, but the family has kept some semblance of it through customs, rituals and traditions. My maternal family was a follower of Baba Farid. Before the child was sent to the pathshala, he had to beg bhiksha in seven homes. *

She was so aware of her name and lineage that when she received the copy of Prateek magazine edited by Agyeya with her story “Sikka Badal Gaya”, she kept reading her name over and over and said, “ This name Krishna is such a common name, but whatever, Sobti saves him. This gave him pride of ancestry.

Krishna Sobti’s fiction offers an abundant array of characters who assert the power of their personalities with absolute nonchalance towards societal reaction or even sanction. In his essay on creative writing, Sobti refers to the author as the most convincing first reader of his own work. Led by her characters, she conducts an unfettered exploration into the depths of their psychology and brings back to herself a heightened sense of confidence and wisdom for her own life. The relationship between her characters and herself seems dialogical. This is why she often criticized them or recorded comments about them just as she would write about her various contemporary writers and characters in the four volumes titled Hum Hashmat. Writing on the character of Mitro by Mitro Marjani, Sobti states: “Mitro is not just a test of the writer’s daring, she is a discovery and a challenge too” (from “Mitro be Damned” in this volume ). Mitro, Sobti is clear, happens to be self-generated, and she emerges from her own self. Likewise, his other characters also carve out their own identity and face their social realities in their own way. How Krishna Sobti the person was born again and again to grow again with each novel is succinctly described by her in her essay on the creative process included in her book Sobti Ek Sohbat. It is crucial for a serious reader of Sobti to read the many thought-provoking essays she has written on this subject, if only to understand the writer’s own investigation into why and how she wrote, how she wrote. approached her characters and what she chose to write about. She knew that “when you allow yourself to make your individual choices, you also continue to determine your limits” (Sobti 2014: 400). However, it is true that as simple as it may sound, it is not easy to be a writer who, of his own accord and without outside pressure, joins his inner loneliness with the outside din. Krishna Sobti used his full autonomy to choose to do it in his own way and on his own terms.

Yet what needs to be taken into account alongside the previous perspective is his keen sense of history which provided the context for many of his writing engagements. In her essay entitled “Some Notes on Zindaginama”, Sobti indicates how for her, the story is not one but there are two stories (and sometimes even more), one that is documented and the other that is perpetuates in the present through the songs of the people. , legends and stories. She knew that as a fiction writer she needed to interface with the story below. It is therefore not surprising that his magnum opus novel Zindaginama is a conglomerate of legends, songs, myths and Hindu, Muslim and Sikh characters living together in a composite cultural mode in the pre-Partition rural landscape of India. undivided. Note these lines from his preface-shaped poem, opening the novel:

The story that is not
And the story is
Not the one recorded in the chronicles
With proofs and proofs
But the one
That flows
Along the sacred Bhagirathi
Of people’s conscience
Flourishes
Spreads
And stay alive In the vital resilience Of ordinary people.
That actually sums up his unique stance on the kind of story this novel sums up.

(Sukrita Paul Kumar, formerly Aruna Asaf Ali Chair at Delhi University, is a well-known scholar, critic and poet with numerous books to her credit. Rekha Sethi is Associate Professor in Hindi at Indraprastha College, DU. She is a critic, translator and editor with numerous publications.)

American virtue is running out. This is how we get it back | Opinion